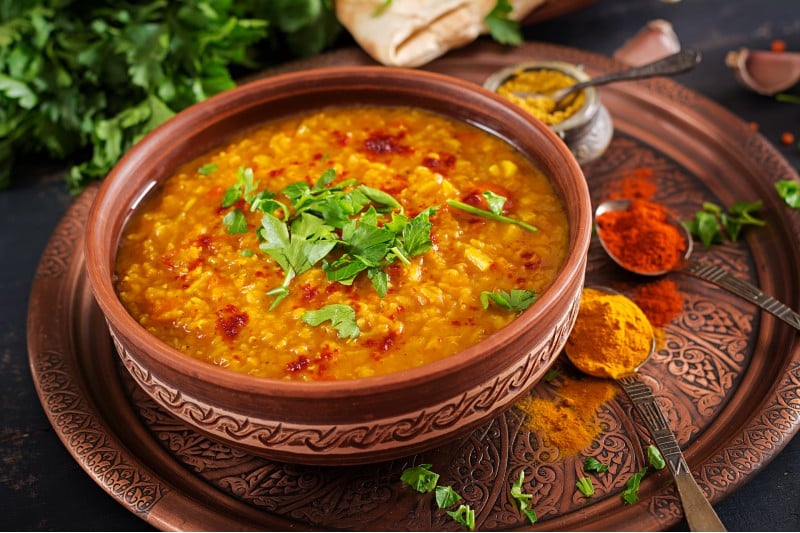 What is Tadka? Key to Indian Cooking

Tadka is known by different terms such as vaghar, chounk or baghar. It is a way to infuse more flavor and depth in your dish with spices combined with hot oil. Spices are one of the keys to Indian cooking. Most cooks often seek ways to optimize the full potential of spices, and there are so many unaware of the fact that hot fat has the power to draw out and preserve the flavor and aroma of spices. When added to a dish, it takes the flavor and aroma with it to enhance the dish. This is what Tadka does.

Indian meals are known to be captivating and appealing. Whenever you are around Indian food, it’s impossible to stop your mouth from watering because their meals are so well spiced with an amazing aroma! Mastering Tadka can help you utilize spices to their topmost potential and improve all your meals!

Tadka means Tempering. It is an Indian cooking technique where grounded, or whole spices are put into hot oil or hot clarified butter to heat up. The essential oils of heated ground or whole spices are released and before they are added to the dish. This cooking technique is also commonly used by the people of Pakistan, Bangladesh, and Sri Lanka. It is also referred to as tarka, chounk, and bagar.

Tadka is either added at the start of the preparation process or added to the dish at the end as finishing touch. For example, when making a dish with spices, you can proceed to put the spice in hot oil to roast before adding the remaining ingredients. Tadka can also be done by preparing the major dish first and then heating up the spices and adding them to the dish just before you serve it.

How to prepare Tadka

Usually, the spices for Tadka are roasted in clarified butter, but oil can also be used to heat up the spices. It is very important to make use of the right kind of oil when making Tadka. In order for the spices to release the needed oil, they need to be roasted at a very high degree. For this purpose, you need oil which can stand the required temperature. Olive oil is not a good option for Tadka because it cannot stand high temperature. Vegetable oil, grapeseed oil, and coconut oil, on the other hand, are better choices.

You can make Tadka in a skillet. You can also use the pot you will be making your dish in if Tadka will be the first ingredient for preparing the dish (as explained above). There is also a special pan for making Tadka, also called Tadka. It is a small deep pan which can prevent spices from popping out from the pan when being roasted.

To prepare Tadka, select your pan and put 2 tablespoons of oil in the pan. Add a teaspoon of your spices into the heated oil and let them sizzle. Leave it for a few minutes to roast. Ensure your spices do not burn because if they do you will have to discard them and start again. Although the spices used vary per recipe, the basics are the same.

Asides from enhancing the flavor and aroma of dishes, Tadka also presents some nutritional benefits. Research has shown that tempering spices allow hot oil or ghee to unlock the nutritional benefits of the spices. For example, hot oil on cumin helps with indigestion, gas, and acidity. With mustard seed it enhances the anti-inflammatory properties, with red or green chili it enhances the effects of the vitamins and with curry, it helps boost the body’s immune systems.

The time you add Tadka in your dish (at the beginning of the process or at the end) is based on the dish you are preparing. In dishes such as Dals, Tadka is often added at the end as a finishing touch. You can try this with Pumpkin Tarka Dal or Onion Tomato Dal. Meals like Mushroom Mutter Masala, on the other hand, begins with Tadka before the other ingredients are added.

Do not prepare Tadka in advance or try making it in large quantity and refrigerating it. This will ruin the aromatic effect. Yes, it might still help enhance the flavor of the dish, but the aroma is also a very important part of it.

Always choose the right kind and size of the pan when making Tadka. If you will start your cooking by making Tadka, then it is advisable you use a bigger pan as the remaining food ingredients will also be added to that pan. And if Tadka will be added as a finishing touch, you can use a smaller pan. Always ensure the selected pan is deep enough to avoid spices popping out of the pan.

Heat up your ghee or oil first before adding your spices. It should be hot to the point where the spices will sizzle when added to the oil. Before adding the spices though, bring the heat down to medium before putting the spices.

An important tip for making Tadka is, the ingredients should be put in a specific order. Usually, they are put in rapid succession still do not add all your spices at the same time. Put spices which need a longer period to cook first and then spices which can cook in a shorter period afterward. For example, when adding your spices, add cumin seeds first as they take longer to cook and then if you will be including garlic, you can add the garlic afterward as they take a shorter period to cook.

Be time conscious so that your spices will not get burnt. Once the spices start to crackle or the color changes, your Tadka is ready. It usually takes a minute or less to prepare so be attentive.

Keep in mind that the oil and spices will splatter. This is why you need to use a deep pan. Asides from using a deep pan, ensure you use a pan with a cover so you can prevent spices from popping out of the pan. It is important for you to move very fast, so ensure all the ingredients are prepared before you start frying.

When preparing Tadka, you can include any spice you desire to make your dish taste and smell amazing. Often used are cumin seeds, curry leaves, cinnamon, mustard seeds, red chilies, garlic, ginger and so on.

If your Tadka burns, you cannot manage it. It will not give you the effect you seek so you will definitely have to start from the beginning. As disappointing as this may sound, do not use burnt Tadka!

2 thoughts on “Tadka – Tempering of Spices”